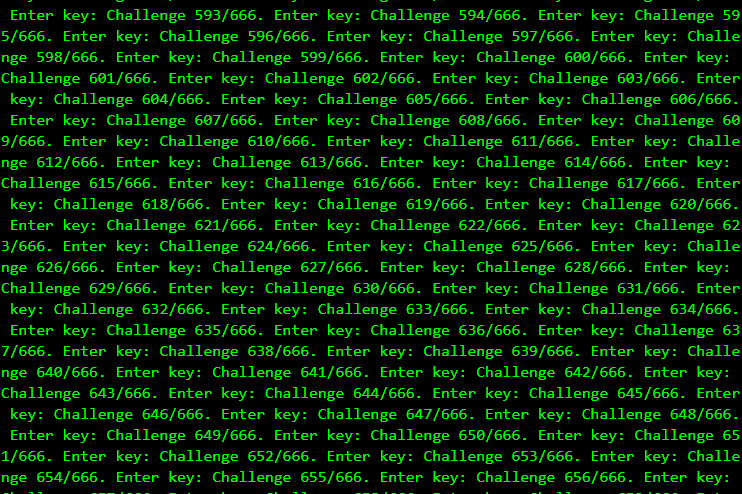 This is part 4 of the Flare-On 5 CTF writeup series.

The challenge starts with a humorous intro.

Wow you are a really good reverse engineer! Keep it up! You can do it!

How to tell if your child is a computer hacker:
1. They are using Lunix, an illegal hacker operating system
2. Are they struggling to maintain contact with the outside world, due to spending their time reading gibberish on the computer screen

This means this is a Lunix challenge, ahem, I mean Linux. The binary for our purpose is an x86-64 ELF. Let's give it a run.

Fair enough. The binary asks us for a key which we have no idea at present. But what about those 666 trials, do we really need to input 666 keys? Let's have a look in IDA. 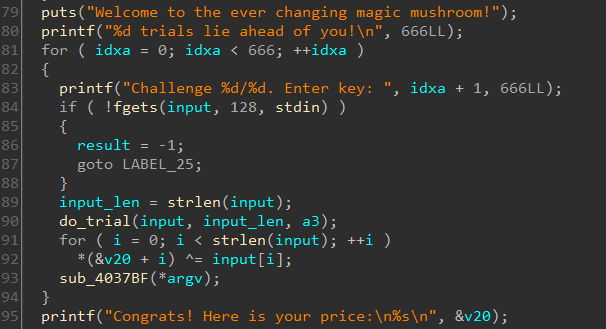 fgets read in the key which can have a max length of 128 bytes. do_trial checks our key.

If our key doesn't match, it calls no_soup which terminates the program.

Going back to main there's a call to sub_4073BF right after do_trial which will only be called if our level key is correct. sub_4073BF calls some other function sub_403167. 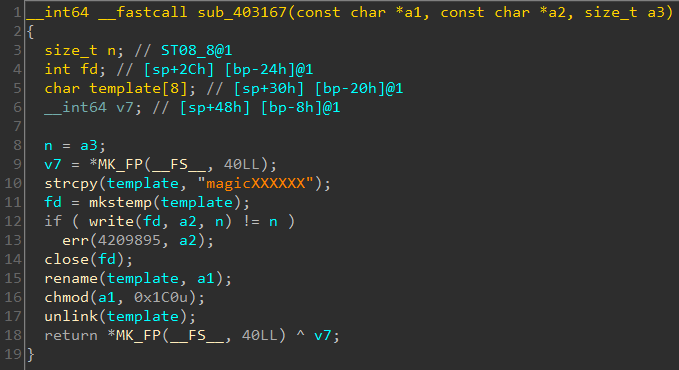 Going through the disassembly we can see it creates a temporary file. Some data is written to it and then renamed. We all look at it later. Let's focus on do_trial for now.

There's a loop which is run 33 times. In each iteration, the failure function no_soup will be called if -

Condition 1 can be satisfied by providing a sufficiently long key close to 128 characters. Satisfying the condition requires finding the correct characters at the corresponding position.

Let's debug this binary to know the target of the indirect call. Set a breakpoint at 402F06 which corresponds to the indirect function call.

When the breakpoint is hit, let us step into it. The call target is sub_400C55.

Decompiling this function we get the following code. 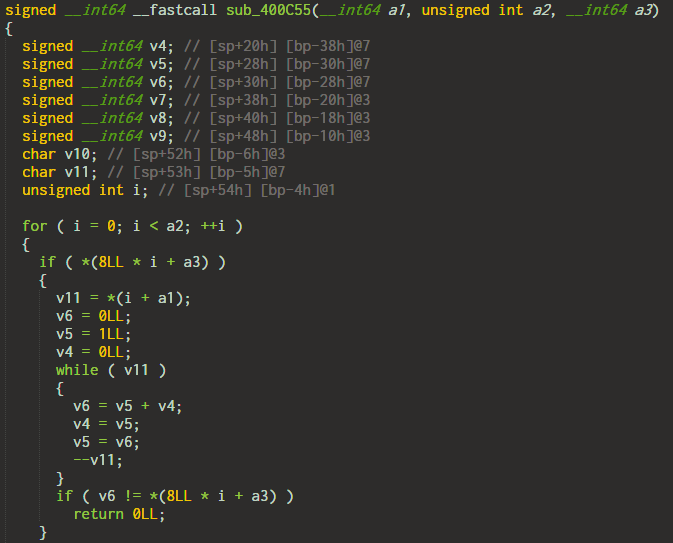 The function takes in 3 parameters where a1 and a3 are pointers to an array. a1 points to a character in the input array. a3 points to target array. After calculation on the input, this must match with the element in the target array. a2 is the number of sequential characters to check.

The code is very similar to how Fibonacci numbers are calculated. In fact, it is calculating the nth Fibonacci number where n is the ASCII value of the input character. For success, the calculated value must match with the corresponding element in a3. We can easily brute-force the correct values.

To keep the post short and readable, I will skip the details and won't show the debugging process where we can find the values in a1 and a3. But this is easy to find by setting a breakpoint at the appropriate location.

At each run of do_trial a different function checks for the correctness of the characters in out input key. Till now we have just seen the Fibonacci code. In total there are 7 different type of checking Functions.

2. A sort of checksum function 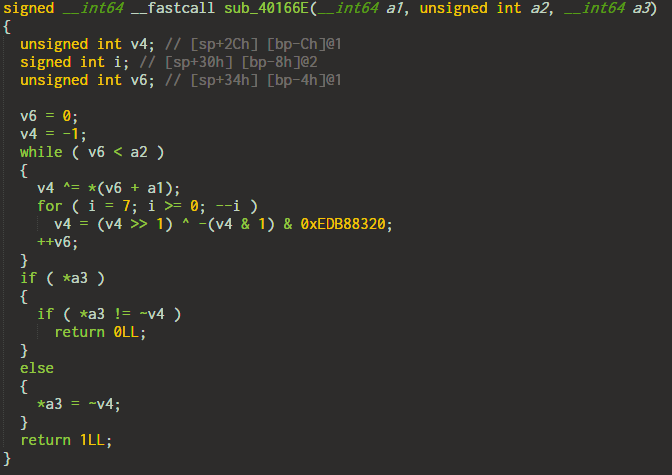 This calculates a hash of the characters and compares it with a3. 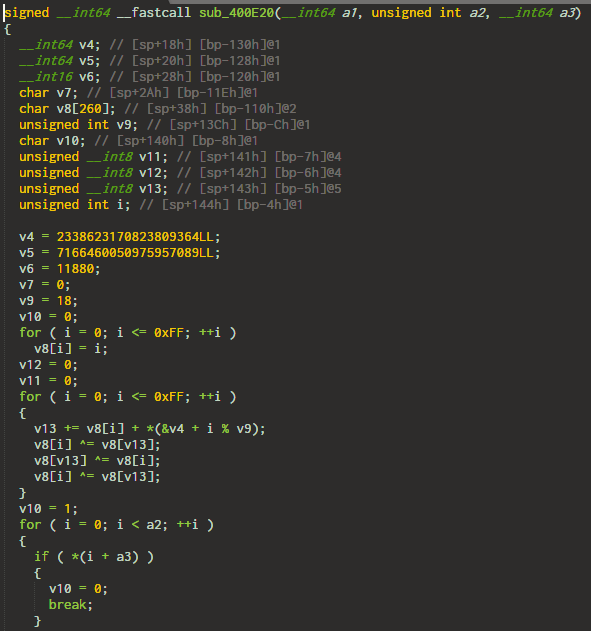 A table of values is generated. The characters of the input key are then xored. The details of the algorithm are skipped for brevity. 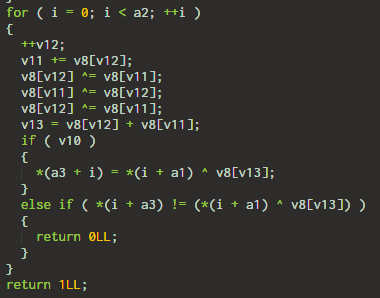 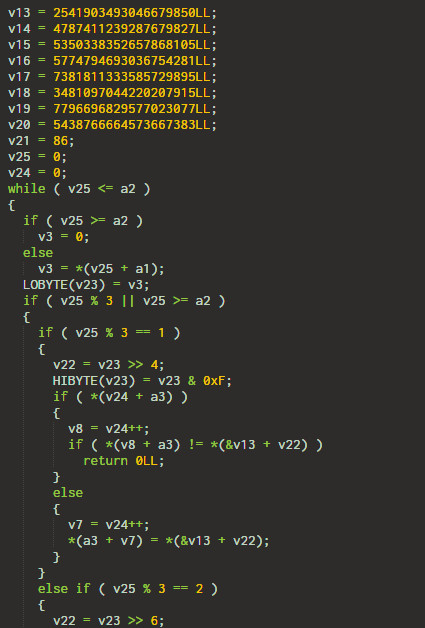 I didn't need to figure out what the function was doing. The only thing worth noting the function must return 1. There is only a single line where the function returns 1 - the last line. 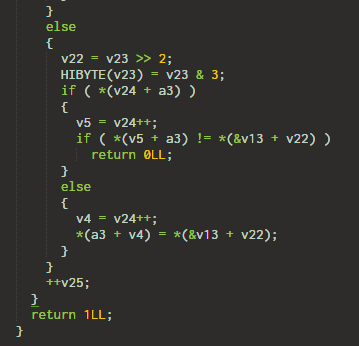 This simply adds 13 to the input character and compares it with the target.

This is the simplest. It just compares input character with target as-is.

Input char is xored with 0x2a and compared with the target. 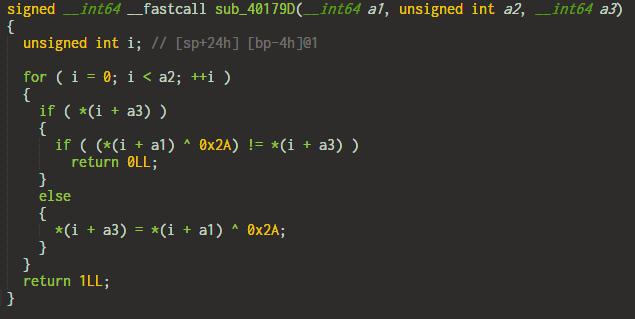 Recall that there was a function which wrote some data to a temporary file. The function would only be called if we were able to successfully find the level key. The purpose of the function was to modify the challenge file itself. The next time we run the challenge binary, the order of the in which the checking functions are called would be randomized. Hence it is important to replace the challenge binary with the original after every unsuccessful attempt or we run the risk of facing a moving target.

There're 666 levels in total. For each level, the key was checked using the above functions in some order. We do not fancy solving 666 levels by hand. We need to automate the process.

For each level, the checking functions were called in some order which we don't know beforehand. We need to devise a method such that it can identify the type of function being called and apply the corresponding technique to solve it.

Taking a hash of the function bytes seem to be a good choice. After all, the function addresses may vary but not the content of the function themselves. After dumping all seven different type of checking functions the minimal size in bytes was found to be 124. This means taking the hash of the first 124 bytes was enough. We can compare this hash to a list and call the corresponding solver automatically.

For this, I used radare2 to debug the binary. The binary requires input from stdin. This can be done by setting up a rarun2 dbg.profile.

input.txt contains 666 lines filled with garbage characters. This will serve as a placeholder for feeding the fgets buffer.

The code for the solver is as follows

get_solver.py calculates the hash of first 124 bytes of the function and calls the corresponding solver. The sign_array contains the md5 hashes.

Finally, let's have a look at the code for solvers.

Straightforward. The nth Fibonacci number is given. Find n.

We use the Z3 Theorem Prover to solve this.

We calculate the table and reverse the algorithm.

This was solved in the most interesting way. All we knew was that the function must return 1 which was at the last line in the decompiled code. We took the decompiled code from Hex-Rays and used the Bounded Model Checker (CBMC) tool from Carnegie Mellon. This tool is generally used to verify the correctness of C/C++ programs but can also be used as a SAT solver.

The C code fed to CBMC is as follows.

Running r2-solver.py takes a couple of minutes and we finally are greeted with the flag.

All 666 levels solved without breaking our keyboard!.

Continue to the next part: Flare-on 5 CTF Write-up (Part 5)